This week, I came across this article by Erik Parker from his blog The Millennial Pastor: “Why nothing seems to get people back to church – The issue at the core of decline”. I’m a frequent reader of his blog, in fact, I translated one of his articles into German a few years ago for theologiestudierende.de.

At first I felt a bit angry about his thoughts, because I know congregations (or for that matter groups in general) that behave just like he describes in his article: “Most churches are, at their core, institutions formed around a social or societal commitment. The core of churches have been based on the fact that people are expected to attend because of societal pressures. And when society taught us through family, friends, neighbours, schools, workplaces, TV, movies, newspapers, courthouses, and governments that being church attenders was important, churches organized around social commitment worked well.”

Well, it doesn’t work anymore. Or does it?

We are a part of everything we undertake. So my anger was rooted in deep sympathy for those little congregations I know in which only a few people meet regularly – not only for service and prayer but also for dinner, barbecue and breakfast. Often these meetings are totally free of “churchish” stuff like prayer or Bible study. They are meetings of a local community and the church is often enough just the place to meet. I must say I profoundly cherish the thought that churches in secularized regions still can be the place to meet even favored by those without any bond to the practices of church.

So the thought, that exactly this community is part of the problem, like Erik wrote, naturally angered me.

But after I did some “brainwrestling” myself, I came to really appreciate his reckoning. Because some of the problems shared by all of this congregations and groups are rooted in a lack of a common center around which the group dwells.

When I took my FSJ (Freiwilliges Soziales Jahr, a year of voluntary social work) at Stadtjugendpfarramt Dresden (youth ministry of the Lutheran church in Dresden) I worked with a group of teenagers who gathered as a so called Junge Gemeinde (youthgroup of a local church) in a rather posh district of my hometown Dresden, called Weißer Hirsch.

Now the Junge Gemeinde has a complex and interesting history in eastern Germany. In the GDR the groups provided much needed room for free thought and speech and many members where engaged in political action like protecting the environment or human rights issues. After the reunification of Germany this political interest quickly secluded. But the Junge Gemeinde stayed.

Being the child of church I am, I became part of the Junge Gemeinde in my parish after confirmation. It really was an important part of my youth. My Junge Gemeinde was a place of fun, a place where friendships could develop and a place of shared enterprises. As it is typical for the Junge Gemeinde we gathered weekly to chat, play, plan activities or discuss. In hindsight I came to appreciate that on every single one of our evenings (the exemptions must’ve slipped my mind…) there were readings of scripture, prayers, even full on Bible studies and discussions of important Christian topics on our monthly schedule. Even when we had no professional group leader we took it on ourselves to prepare proper evenings. We fed each other with the Word and huge amounts of instant tea.

So when I became semi-professional group leader at Weißer Hirsch during my FSJ I went there with a distinct picture of what a good Junge Gemeinde had to look like. A place of fun and friendship centered around the Word of God, which is indeed Jesus Christ.

Having a thematic discussion including prayer didn’t came naturally to the group of fellow teenagers I had to deal with. Especially because I insisted that it should take place every single meeting. But over the course of half a year or so we all adjusted and came to really like the time we shared in thinking about the bible, praying and even singing. This group, centered on a common practice of being church, attracted more and more teenagers and in the next spring after the confirmation included a whole new generation of 14year-olds.

Leaving this group was rather hard for me. Over the run of a year, not only had I met a bunch of interesting young people but I had come to know and really like them, too. I reckon, that feeling was mutual. But I completed the FSJ and left the group at Weißer Hirsch not without a pinch of pride in my heart over what we had accomplished together. And I took my lessons learned in this group with me.

Since then many years have passed and I was fortunate enough to become part of many more groups equally gleeful and challenging. All I learned in my years as a group member and leader resonated with Erik’s calling to place the Word in the center of the group not community itself.

After all, groups which put themselves in the center are more likely to stay alone, focused only on the concerns of those who already take part, and thus always in the danger of extinction. A group with a clear and distinct center other than the group itself will attract new people. It’s much like a long lasting circle of friends. When only old stories and the shared past are topic in conversations newcomers like girl- or boyfriends will find it very hard to join in. The common center provides topics about which you can talk even without knowing the others all too well. If the common center additionally takes the form of liturgy occasionally (or for that matter any fixed way of doing something), taking part in the group action becomes even easier – as long as the “liturgy” isn’t too hard to learn.

There is nothing wrong with having intimacy in your group, but if you want to have more members and attract a diversity of people or even take part in a group which actually has a completely different purpose – to pass on the gospel for instance – you need something other than yourself in the center of your endeavor.

The medium is the message

So I made my peace with Erik’s article and then I stumbled upon his last sentences: “But churches DO have to choose what is at their core. Churches need to choose the foundation that gathers their community. Is it a social commitment to church? Or are we followers of Jesus whose shared passion brings us together?“

And I came to the conclusion that in good congregations it’s really not a matter of “either … or”, community or Jesus at the center. Because the core of our belief is the communion of Jesus with God and his disciples. The medium is the message. God comes to us through other people. Jesus himself committed to our community when he declared: “For where two or three gather in my name, there am I with them.” The Holy Communion in itself is a symbolical representation of that new reality in Christ. A congregation that nourishes itself not only at potluck but also at Eucharist is all it can and should be. 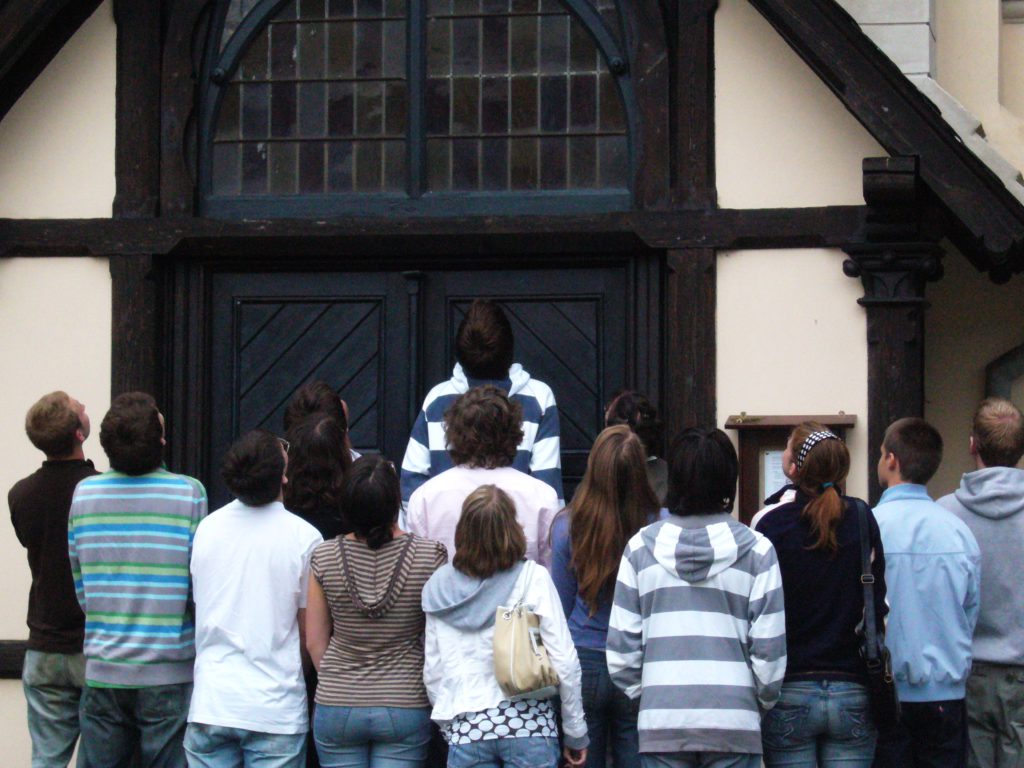